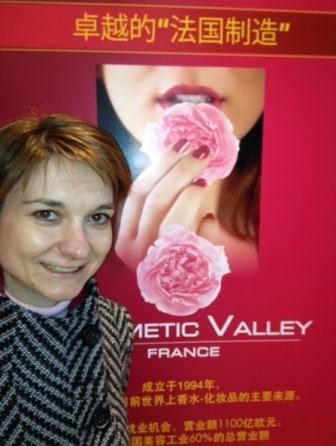 Industry association Cosmetics Valley aims to raise the stakes for its member companies with its first ever pavilion at the recent PCHi event in Shanghai, China.

Ingredients player Inolex is expanding its operations into some of the fast-growing Asian markets, as well as readying the launch of a natural silicones alternative.

PCHi expo readies to open its doors in Shanghai next week

The Personal Care and Homecare Ingredients (PCHi) event will platform the latest industry innovations at the Expo Theme Pavilion in Shanghai and the Cosmetics Design team will be there.

Since the 2008 advent of compulsory ingredients registration in China the initiative has made doing business more complex and also opened up the door to counterfeiters, according to Campo Research.

Italian active ingredients player Indena says that its participation in the forthcoming PCHi event in China next February will play an important part in the company’s strategy to grow its cosmetics arm.

Aqua Bio Technology (ABT) has entered into a distribution agreement with LICA Enterprises in China, Hong Kong and Taiwan for its ingredient Aquabeautine XL in a move aimed at expanding its network in the Asian cosmetics market.

The market for skin care in China is expected to continue its phenomenal growth, but companies are going to have to target consumers with innovative products that hit key trends if they want success.

When targeting China, cosmetics companies can face costly negotiations with tax authorities, according to Sandra Hazan of legal firm Salans.

With low penetration and a large customer base, the cosmetics and toiletries market in China is a lucrative one for both local as well as international players.

Growth in China a key target for AmorePacific

South Korean cosmetics manufacturer AmorePacific will look to boost its presence in the expanding Chinese cosmetics market this year, according to a report by a South Korean market research organisation.

Rhodia looks to guar technology unit in China for reinforcement

Chemical company Rhodia has announced the acquisition of polymers company Suzhou Hipro as it attempts to reinforce its global position in guar technology and develop its presence in China and Asia-Pacific.

Japanese-headquartered Kao Corporation has invested in a new manufacturing plant in the Anhui province, China, in order to reinforce its production base of consumer goods in the country.

Gerresheimer establishes Chinese presence due to demand for glass packaging

Glass and plastic manufacturer Gerresheimer has recognised the development of China as one of the world’s key growth markets and moved quickly to become one of the first choice partners for the Chinese cosmetics industry.

A ‘buoyant’ performance in Hong Kong and Macau and strong online sales helped Hong Kong-based cosmetics retailer Sa Sa deliver a 2009 annual turnover of HK$4.1bn (€430m), up 13.9 per cent on the previous year.

‘Digital competence’ in China key to success in prestige market

Prestige brands need to increase their ‘digital competency’ in China in order to ensure future success in not just China, but in the global prestige market, according to a study from NYU Stern School of business.

Lonza has confirmed that its planned vitamin B3 production expansion will occur in China, where the firm expects a double digit surge in demand for the ingredient in coming years.

Getting a foothold on the ever-expanding China market requires dedication, product focus and the means to navigate regulation, says expert.

With the growth of cosmetics sales continuing in most of the major developing markets new opportunities continue to proliferate for niche cosmetic players, but now is the time to get in on the act.

The Chinese market for natural cosmetics is predicted to experience a period of impressive growth, according to the National Products Association (NPA), which has announced plans to continue its market development program between the US Department of...

Good performance from Nivea helped keep Beiersdorf’s results up although costs relating to its Chinese operations may affect profits before the year is out.

The secret to successfully entering the Chinese cosmetics market will be one of the focus points at this year’s Cosmoprof Asia, held in Hong Kong in November.

Johnson and Johnson invests in the Chinese market

Johnson and Johnson has bought a Beijing-based cosmetics company in an attempt to increase its presence in the booming Chinese market.

Latest research shows that there has been a significant rise
in the market for premium facial care products in China as the
country's booming economy continues to fuel consumer spend.

The EU will not compromise on the safety of Chinese exports and
will continue to monitor the market even though the country is
making efforts to combat the problem, according to an EU official.

Flavours and fragrance company Symrise will open a creative centre
in Shanghai, China in an attempt to capitalise on the potential of
this growing market.

Risdon International has announced the reorganization of its
Chinese operations in a bid to streamline the operations of its
recent acquisitions made in the country.

Make-up brand Rimmel is heading to China as part of Coty's plan to
exploit Asian markets and become one of the top five beauty
companies in the world.

Anti-ageing and whitening products drive China's prestige beauty
industry whilst colour cosmetics may prove to be the sector to
watch in 2008.

Companies outsourcing to China need to go well beyond price and
delivery terms to ensure that their products are not toxic, warned
the Investor Environmental Health Network (IEHN) as trade talks
between the US and China kicked off...

Beiersdorf will pay €269.45m for an 85 per cent stake in
China-based C-Bons Hair Care as the cosmetics giant looks to
penetrate deeper into the fast growing market.

President Hu Jintao of China said this week that his country is
going to make a concerted effort to up product safety standards
with the help of the international community, following a spate of
China-made product seizures worldwide...

Tainted toothpaste has turned up among the supplies of a luxury
provider of toiletries for international hotels, taking the Chinese
toothpaste scare beyond the gray market.

FDA officials have conceded that the distribution of tainted
toothpaste throughout the US is much more wide-spread, extending to
larger numbers of discount stores than first thought as well as
prisons and hospitals.

The recent scare over tainted toothpaste imported from China is
forcing US authorities to mount pressure on the China government to
impose restrictions and increase vigilance over imports of gray
market goods that continue to flood...

China has long-proved a difficult market for personal care players
to crack, but after the government recently announced that it was
relaxing personal care import regulations from countries with BSE,
things might start to get a little...

In line with huge growth in the market for cosmetics and toiletries
and the recent scare of the P&G SK-II skin care line, China
authorities have more than doubled the number of banned substances
for formulations.

As the China market for direct sales opens its doors to more and
more international companies, the number of players trying to tap
into what is tipped to be a thriving growth market has swelled
after US businesses Mary Kay and Amway...

Proctor & Gamble is back on the road to redemption in China
after its SK-II range re-appeared on store shelves this week
following a ban brought about by a scare relating to traces of
heavy metals that were found in formulations.

Oriflame gets China go ahead

Oriflame has become the third foreign cosmetics company to be
granted a direct sales license in China, putting it on track to
carve out a slice of the country's fast-growing consumer market.

Avon powers ahead with China recruitment

Having received the first license for a foreign-owned company to
resume direct sales of cosmetic products in China, Avon added more
than 33,000 new sales staff to its workforce there last month,
according to data from the Chinese...

China rapidly emerges as a worldwide hub for cosmetics

With exports of cosmetic products from China expected to rise 20
per cent during the course of 2006, China is rapidly emerging as a
world-wide hub for the cosmetics industry. But challenges for this
burgeoning industry are on the...

Multinational suppliers for the cosmetics and toiletries industries
are facing increasing competition from China, while Japan continues
to offer innovation, says a new report from Kline and Company.

The counterfeiting of high-end cosmetics and fragrances in China is
big business and it is hitting luxury goods makers hard. But they
are now fighting back harder too, and if a recent lawsuit involving
Louis Vuitton Moet Hennessy...

German personal care giant Beiersdorf says it wants to achieve a
5.5 per cent of the global market for personal care products by the
year 2010 and will be particularly looking to the markets of China,
India, Brazil and Russia to help...

The race between home-made, joint-venture and imported skin care
products is becoming increasingly fierce as the market matures and
segmentation becomes more defined.

L'Oreal thinks its Asian customers are well worth it. The global
beauty giant is opening a new R&D center in China to carry out
research into the structure and behavior of Asian skin and hair,
which it plans to use to develop...