‘Good enough to eat’: the trend for food ingredients in cosmetics gains pace

A rising number of cosmetics companies are now formulating products from ingredients normally found in the kitchen. This is the latest trend to emerge from escalating interest in organic and natural products.

The Cosmos standard for natural and organic cosmetics has been released after six years of debate between some of Europe’s biggest certification bodies.

Being organic or natural won't necessarily make a product green

Natrue works on equivalency agreement with US naturals body

Natrue, a European certifier of natural cosmetics, is working on a mutual recognition agreement with the Natural Products Association (NPA) in the US.

Cosmetic chemists fought hard against the idea that natural ingredients are inherently safer than their synthetic counterparts at this week’s cosmetic science symposium. 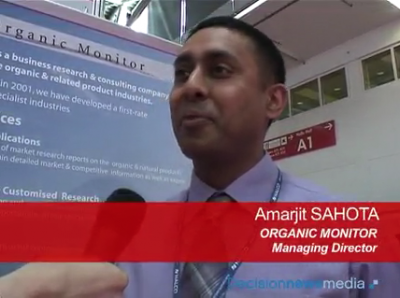 Several new organic and natural standards have been launched over the last 18 months on both sides of the Atlantic. CosmeticsDesign.com talked to Amarjit Sahota, director of Organic Monitor, to get under the skin of the “certification wars”.

Organic preservatives come at a cost, but formulators are now willing to pay

At Suppliers’ Day in New Jersey last week CosmeticsDesign.com spoke to Kris Kudrnac of K3 Corporation who explained how the industry is experiencing a “mad rush” for natural and organic preservatives.

Organic alternatives to certain synthetic ingredients have been elusive. Peter Boncelet from Earth Supplied Products explains why organic cosmetics have yet to fully live up to the marketing hype but suggests that chemistry is starting to catch up.

Symposium for cosmetic chemists to be held in UK in May

Cosmetic chemists prepare to investigate the new generation of anti-ageing products and the potential of natural ingredients at the upcoming UK SCS annual symposium.

Aldivia is launching a range of Ecocert certified organic surfactants for the cosmetics market.

Givaudan has partnered with a Laos-based producer to secure the sustainable supply of benzoin, a raw material used in fragrances.

The first products certified to the organic and natural Cosmos standards cannot be expected before spring 2010, but UK member Soil Association is confident uptake will be strong.

The organic oil specialist, Earthoil, has achieved fair trade status for its Indian mint growing facility under an Institute for Marketecology (IMO) scheme in order to meet growing demand for ethical products.

An anti-aging active from Belgium-based company KitoZyme is now listed as Ecocert compliant.

A supplier of lignin-derived vanillin claims that its processes for sourcing and producing the ingredient can dramatically reduced the carbon footprint compared to sourcing from some mineral oils, according to recent testing.

Organic Monitor digs into natural cosmetics in the UK and Germany

Organic Monitor has published a report on the natural cosmetics market in Germany and the UK highlighting the growing popularity of private label brands in both countries.

Dr Straetmans’ new range of organic actives target manufacturers looking to up the proportion of organic raw materials in their formulations.

Manufacturers are advised against labelling their products as ‘free from’ certain ingredients by the UK cosmetics trade association (CTPA).

Manufacturers could be misleading consumers over preservatives, report

Highlighting the absence of certain preservatives in a product when the formulation contains others is misleading to the consumer, according to France’s body for competition and fraud control (DGCCRF).

In an effort to maintain growth during the downturn Berkham is refocusing its business to concentrate on vegetal extracts for the cosmetics and food industry.

The relationship between the European harmonised standard Cosmos and its cousins on both sides of the Atlantic will be explored in a masterclass on natural and organic cosmetics.

Natrue and QAI work towards cross-border recognition of organic standards

Natrue is working on a mutual recognition agreement with Quality Assurance International (QAI) that the certifier hails as a step towards international harmonisation.

Improved performance and consumers' love of all things natural is pushing the trend for plant-based active ingredients, according to a recent Kline report.

The Body Shop needs a health check, judging by L’Oreal’s 2008 financial results. The brand reported a sales drop of 2.3 percent, not accounting for new stores opened during the year.

Consumers will have to change their expectations before the market for organic fine fragrances can take off, says industry insider.

Naturals may save the day for European personal care players

Riding a wave of extraordinary market growth, the naturals personal care category could be one of the few areas where growth will continue amidst the economic gloom.

CPL Aromas has released a range of 100 percent organic fragrance ingredients to meet the growing demand for certified organic products.

France-based LibraGen is looking for partners to help develop its range of stable polyphenol compounds for cosmetics products.

Industry insiders predict that natural and organic cosmetics will hold up well in 2009 even if they do not enjoy the dramatic sales growth of previous years.

LycoRed goes under the skin of UV protection complex

LycoRed has, for the first time, looked at the effect of its tomato lycopene complex on the histological characteristics of the skin.

‘Values’ will not necessarily be sacrificed for ‘value’ when it comes to ethical purchasing in an economic downturn, according to a recent Co-op report.

European organic and natural standards will be released next Spring

The publication of harmonised European organic and natural standards is just around the corner, according to leading certification bodies at the Natural Beauty Summit.

Dr Straetmans is expanding into Eastern Europe to capitalise on the growing demand for natural cosmetic ingredients in the region.

The mainstreaming of natural and organic personal care products means that the value of the European market is set to exceed €1.4bn this year.

A new market report highlights the fact that strong development in the French natural and organic cosmetic market has given way to the largest market for fair-trade products.

Arylessence has created a range of organic fragrances in response to the growing market demand for luxury ‘green’ products.

Natural ingredients supplier Alban Muller has launched a range of plant based dyes to add colour to personal care formulations.

France-based Biotech Marine has launched a new anti-aging concept called BioFA, which is based on marine-derived phytoplankton and arginine ferrulate.

The global market development manager for personal care at Eastman discusses how sustainability is changing the face of product development.

DuPont and Tate & Lyle Bio Products has received Eco-Cert certification for Zemea, a petroleum-free glycol that it claims is an industry first.

Symrise has partnered with a Californian producer of botanical extracts as part of plans to become the number one global supplier of green cosmetic ingredients.

Croda is on the hunt for new sustainable cosmetic ingredients having signed a three year research agreement with marine biotechnology firm Aquapharm.

Aveda hones in on packaging recycling

Aveda says it is leading the way in sustainable packaging, having announced what it is claimed to be the first ever scheme in the US to recycle caps.

France-based Alban Muller has launched 29 new active ingredients
for the global naturals market with "super fruits" at the heart of
the offerings.